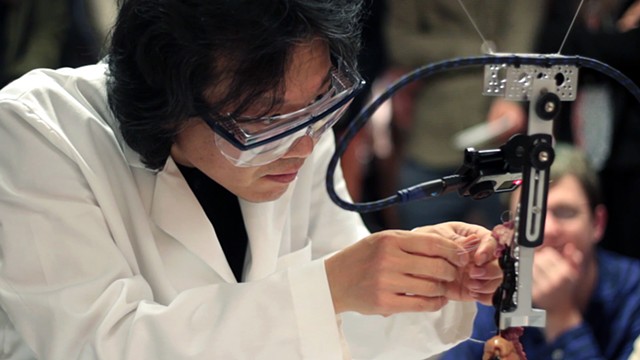 Doo Sung Yoo is a Korean new media artist who works in the United States. He explores hybrid art, synthesizing natural and unnatural technology within artwork, interweaving interdisciplinary media between arts, science, and technology, and finding and discovering the aesthetic possibilities for interactions between human and technological nature, and trans-species communication between human and non-human animals. His current focuses are on surpassing the human body and organic forms with technological augmentations, which explore beyond the conventional parameters of the natural world, which are illustrated in the Organ-Machine Hybrids, in which disembodied animal organs are combined with electronic devices within mechanical bodies and the human body.

His experimental hybrids have been shown in many exhibitions and art festivals, such as the International Digital Arts Festival, Prospectives.09 at Reno, Nevada, and Ingenuity Fest 2012 and 2015 at Cleveland, Ohio. He presented his works in the conference of International Symposium on Electronic Art (ISEA) 2012 at Albuquerque, New Mexico, the Conference of College Art Association (CAA) 2013 at New York City, and Art and Speculative Futures, International Conference 2016 (Barcelona, Spain). His hybrids were also featured in the framework of lectures in the International Conference, Bodies on Stage: Acting Confronted by Technology 2015 (Paris, France) and the keynote speech of Borderlines IV: Resisting, Persisting, Performing 2016 (Leicester, England). His organ-machine hybrids were nationally and internationally reviewed and published in art magazines, books and journals, such as Intertekst (published by Laznia Centre for Contemporary Art, Poland), Evolution Haute Couture: Art and Science in the Post-Biological Age (published by the Kaliningrad Branch of the National Centre for Contemporary Arts, Russia), Wi: Journal of Mobile Culture (Canada), and the American art journal, Media-N, Journal of the New Media Caucus. Artist Statement

I create environments in which living entities and biological materials, including the human body, are combined with technological systems. In these environments, technology mediates the confluence between two binary oppositions, such as human and non-human, human and machine, living and dead, and normal and abnormal. My artwork is based on those intersections between natural and unnatural (artificial) worlds. I synthesize organic and mechanical components into spectacles both ‘repulsive and beautiful’.

My current project, Organ-machine Hybrids, has probed the ‘technologically-augmented body’, in which biological and mechanical systems are integrated and where humans and machines must cooperate in order to exist as hybrids. This project also implements collaborations between the hybrids and human performers and/or living animals within installations, visual performances, and theatrical forms. These explorations are based on my questions about how the combinations of biological materials, living entities, and machines could be contextualized within art, how the agenda of extending the human and non-human body could be explored within the aesthetic realm, and how new media artists contribute critical views and thoughts to correlations of human, nature, and machine in their co-evolution.

I use the language of video to embrace a larger audience. I hope that the cinematic visualizations will spark curiosity in those who are willing to explore hybridization, cyborg, and lifelikeness in the Organ-machine Hybrids. My use of multidisciplinary performance, installation, and robotic sculpture creates a mix of technical exposition and immersive narrative allowing the viewer to approach the themes from multiple perspectives. I strive to keep a balance between the ‘conceptual’ and the ‘technical’. My videos are a combination of scientific plausibility and artistic conceptualization that helps maintain the suspension of disbelief when encountering these unrealistic human-machine hybrids through performance and installation.