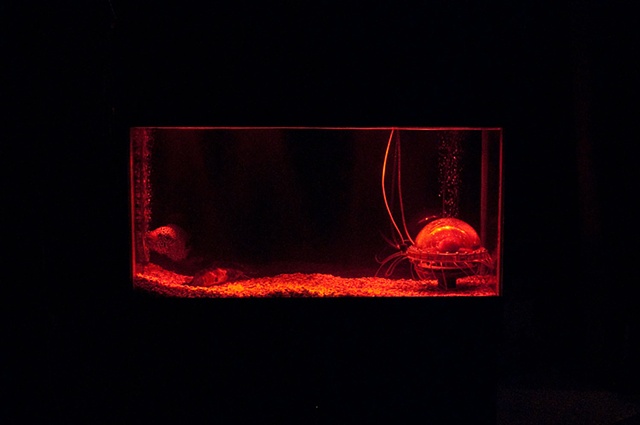 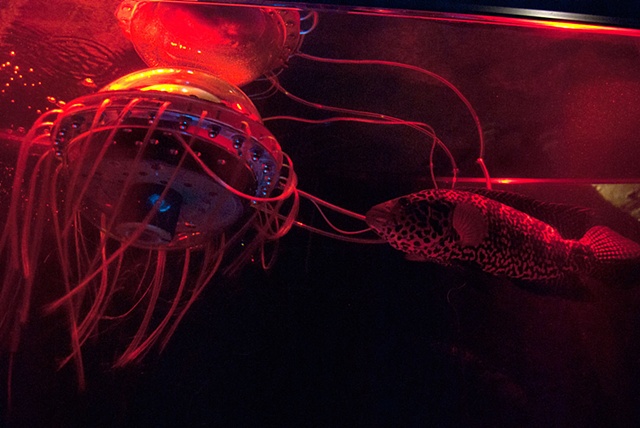 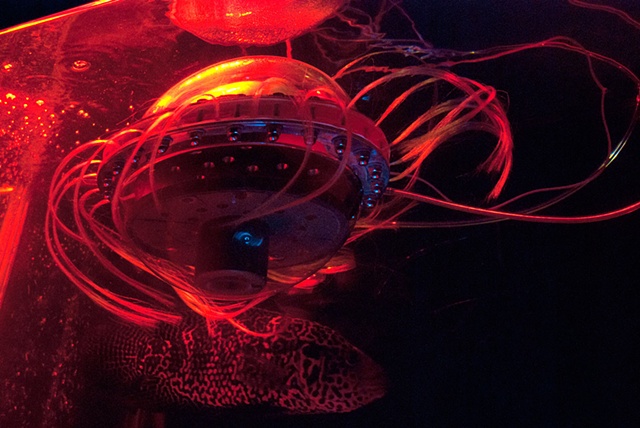 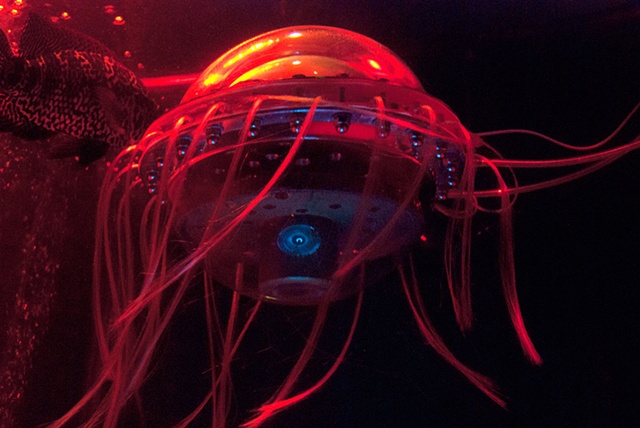 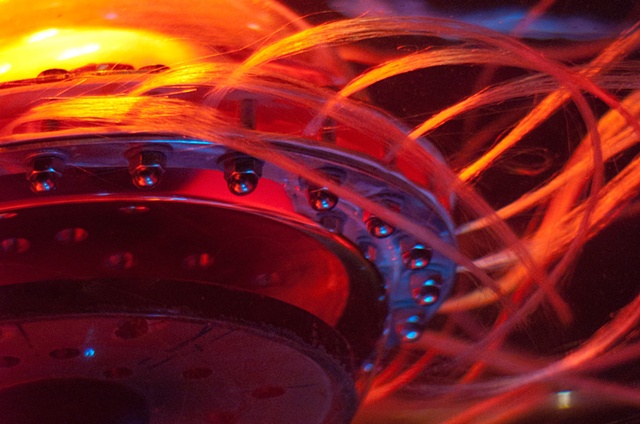 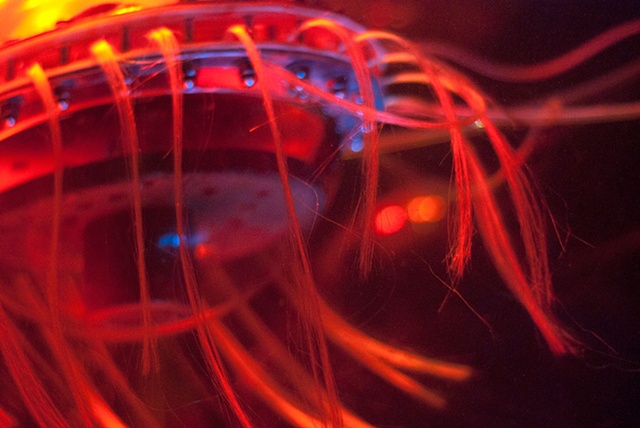 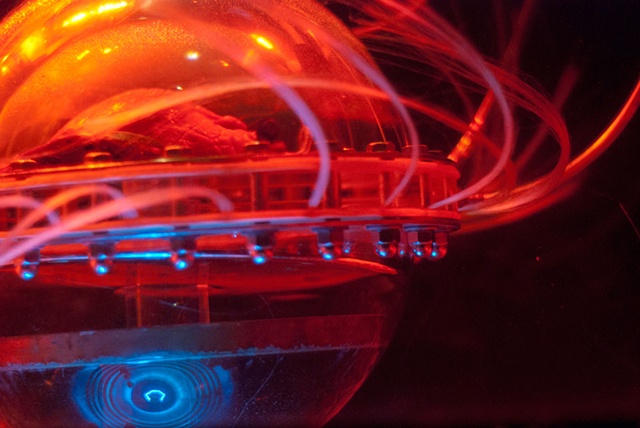 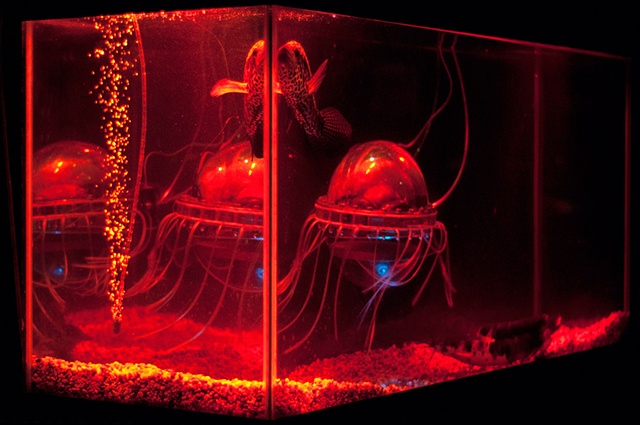 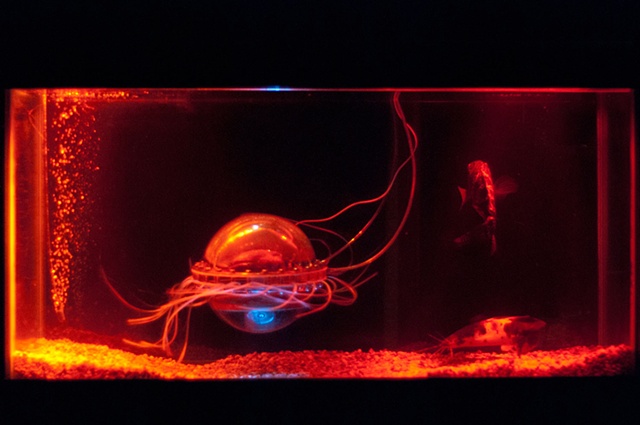 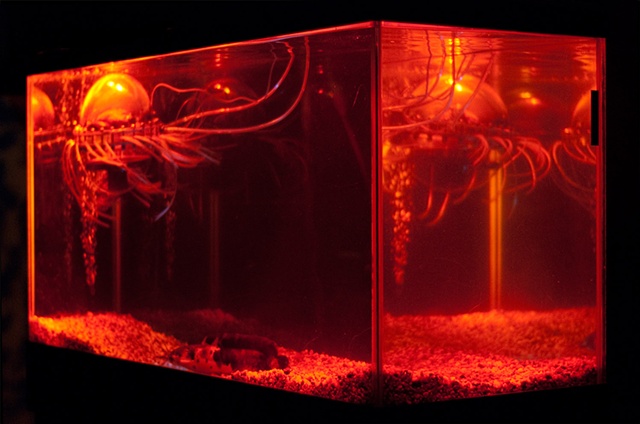 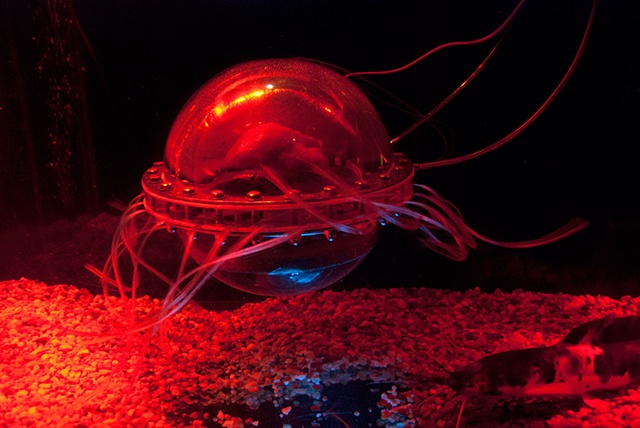 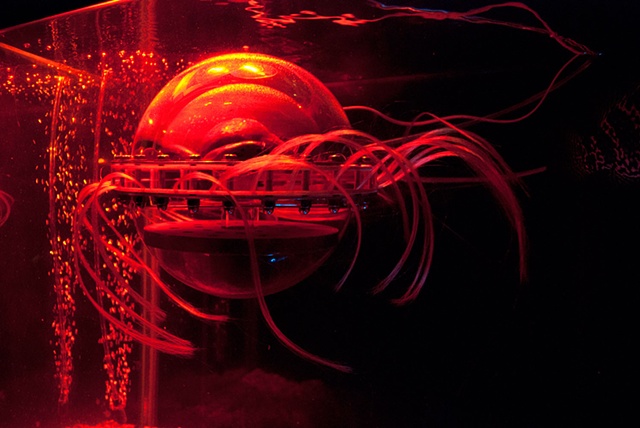 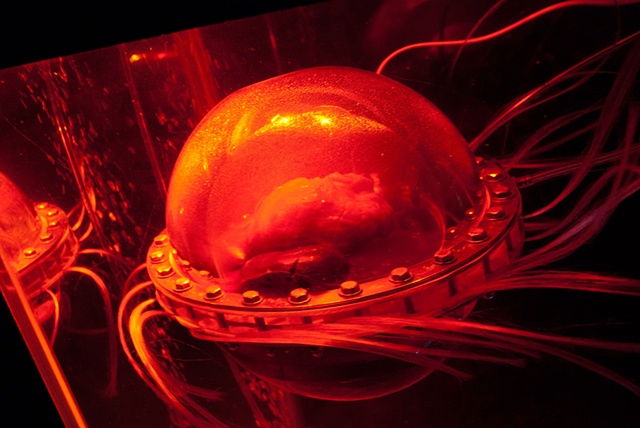 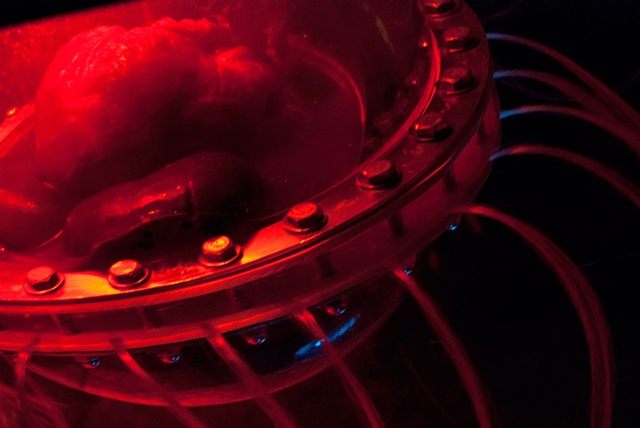 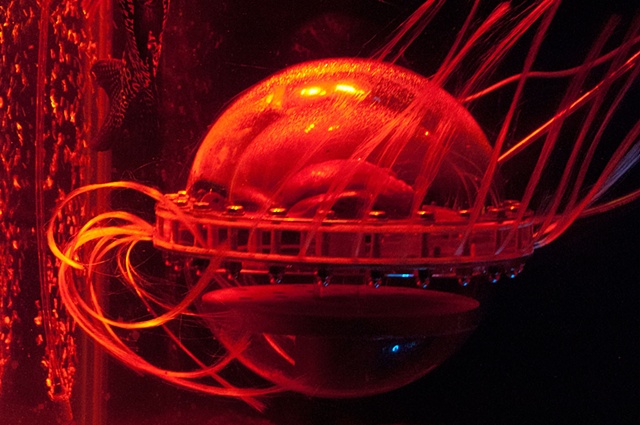 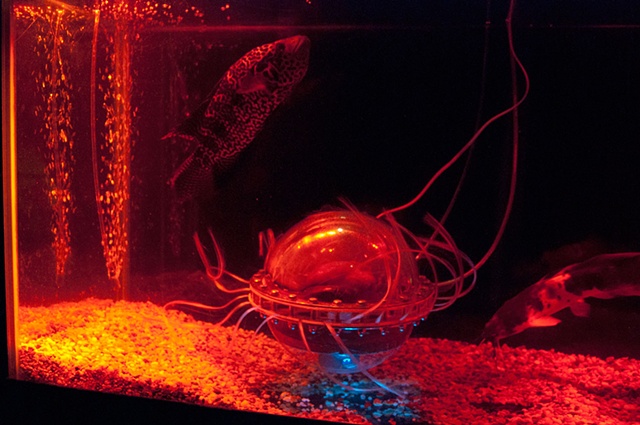 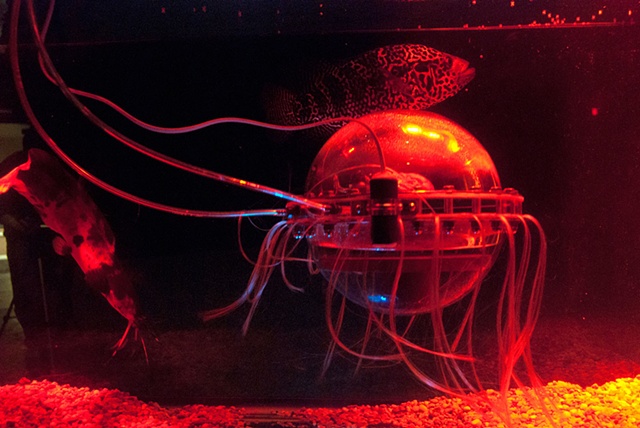 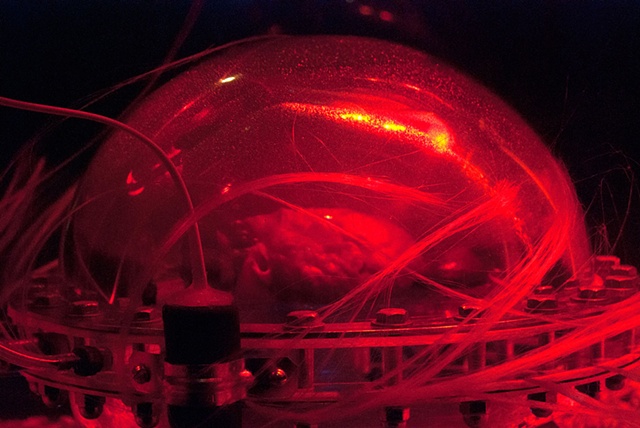 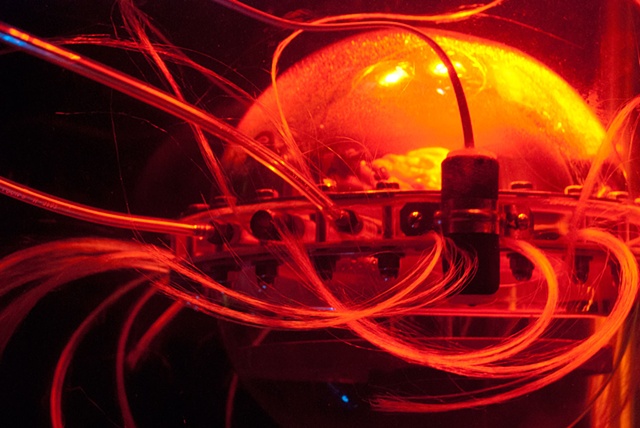 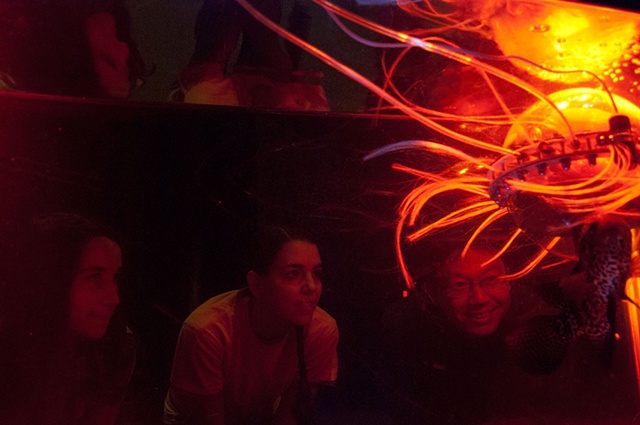 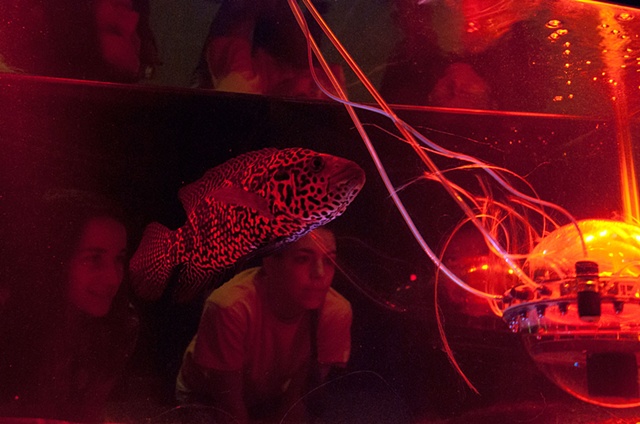 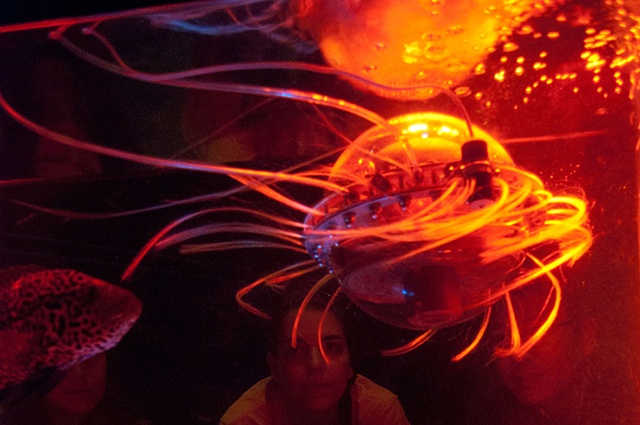 The artificial jellyfish combined a pig heart with electronic devices that allowed the hybrid to be submerged and gave the appearance of a beating heart inside the work. In the project, a pig heart returned to life within a machine, a new body. The machine pumped the pig heart, which was set within two transparent plastic half domes. These were held together with screwed metal bolts and plastic tubes. Human hair was attached around its new body to emulate jellyfish stingers.

A water level sensor and a microcontroller created computational motions of robotic jellyfish by regulating the rate of water intake and release within the body for controlled breathing and submerging speeds. These regulated movements were synchronized with neighboring real fish within the aquarium. Background

The robotic jellyfish has a ballast tank that serves as the bottom chamber and allows the operator to change the amount of buoyancy within the body, which referenced many different types of submarines’ diving processes to direct this process.

A plastic panel, the boundary between the two plastic half domes, was modeled in an AutoCAD computer software for detail measurements and degrees of the water and air passages. This was the core component for sucking and releasing water and air in the ballast tank of the robotic jellyfish. The panel was physically created through CNC Milling Machines in the Materials Science and Engineering Laboratory at the Ohio State University.

Creating a robotic pig heart-jellyfish was an attempt at creating an environment where the project could explore the movements between the artificial creature, programmed by electronic devices and software, and the “real” environment of the neighboring fishes and the water current. Combining real and artificial movements in this installation raised questions about the harmony between nature and machine.

Involving the pig heart in the robotic jellyfish represents a wish for more hybrid medical solutions for the lack of replacement organs in cross-species transplants. For example, pig hearts have long been used to foster life in human bodies. According to Physician Kirsti Dyer’s report, Organ and Tissue Donation statistics, more than 92,000 Americans were on the waiting list to receive a transplant organ in 2006 and 6,500 people died before getting new organs in 2005.

Robotic Pig Heart-Jellyfish will evolve continually into different forms through adding new organs and implementing new technology, which are inspired by the transhumans and posthumans’ radical technological innovations for the human form, though here applied to animal organs integrated within these hybrids. Cast